We are pleased to introduce you to the team at Presque Isle Wine Cellars. From our customer service team that provides you with the home and commercial wine making supplies and support you need to craft superior wine, to the team that creates, crafts, and sells our award winning wines, we are proud of the people that work with us and their contributions toward helping the company live up to its values. 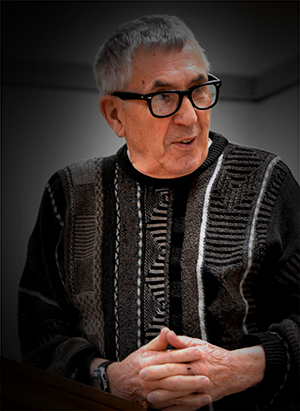 Doug Moorhead (1934-2021), is the Founder of Presque Isle Wine Cellars. Often called "The Father of the Pennsylvania Wine Industry", Doug grew up on a fruit farm in Harborcreek Township in Erie County and at 80-something was still farms on his 170 acre family owned vineyard in addition to his activities with Presque Isle Wine Cellars. He graduated from Penn State in 1956 with a degree in Pomology. Doug's father, Douglas McCord Moorhead, to help survive during the Great Depression, had a side business brokering what few wine varieties there were in the area with several small ethnic wineries in or near Cleveland, Ohio and with Gold Seal Vineyards and Widmer Vineyards in the Finger Lakes Region. He was also very active in cooperatives in the Lake Erie area and was President of National Grape Cooperative when it was able to purchase Welch Foods and vastly improve the economic prospects of Concord growers. He was later President of Welch Foods in the late 1950's. Doug grew up in that environment and became interested in the economics of growing wine grapes to replace the acreage of other fruits such as sweet and sour cherries, peaches, plums and apples which had become less and less profitable in the Lake Erie area. Doug experimented with nearly 200 French Hybrid varieties and introduced the growing of European grapes (Vitis vinifera) into the Lake Erie area in the late 1950's. One of his main interests was to produce quality wines from traditional European grapes grown in Pennsylvania, a goal which several other wineries in the state are now also accomplishing. He was the first chairman of a State Grape Marketing Council which developed the legislative proposal that became the Pennsylvania Limited Winery Act in 1968. He was a long time director and a past president of The Pennsylvania Wine Association, was a long time director in the National Grape Cooperative, which owns Welch Foods, was an adjunct professor in the culinary department at Mercyhurst College in North East, PA, and was a director of Wine America and The Pennsylvania Grape Marketing Board. Though he enjoys walking a bit more in his later days, Doug was a champion competitive runner completing marathons and ultra-marathons into his fifties. He was also an avid Bridge player holding the Life Master rank.  Doug passed away on June 10, 2021.  Click here to learn more about his happy and impactful life.

Marlene Moorhead is a company Shareholder. With a background in child development and a Master’s Degree in School Psychology from Edinboro State University, Marlene joined Doug in the business when Doug's original partner, Bill Konnerth, retired in early 1975. She acted as winemaker when she began, and retired after 34 years of helping to grow the business at the end of 2007, though she still keeps an eye on things and pinch-hits now and again during busy times.  Marlene is a well-respected wine taster and judge, and she became a lifetime member of The American Wine Society in 1984.

Erik Moorhead, son of Doug and Marlene, is currently Chairman of The Board and PIWC President. He graduated from Penn State in 1984 with degrees in civil engineering and humanities and received a Master’s Degree in Structural Engineering from the University of Texas at Austin. After spending summers and a year after college (four economic meltdowns ago) working with PIWC, he ventured off to pursue a career in architectural engineering but has kept close ties to PIWC. Erik resides with his architect wife, Lorrie Adair, and daughters, Tully and Ava, in Grapevine, Texas. When he is not helping PIWC move into the future and attending to our Texas customers, Erik is involved in managing large architectural and construction projects such as Terminals D and E at DFW International Airport, the Ritz-Carlton Dallas, JW Marriott Austin, Grand Hyatt Nashville, and, currently, the Nashville Yards Development for Southwest Value Partners, a leading real estate investment company. At his current stage of "maturity", Erik is happy to still be playing fly half for his local rugby club and is the token American in his squash group.

Robert (Bob) Green has returned to Presque Isle Wine Cellars as our Executive Winemaker as of September 2015 and oversees our Wine and Fresh Product operations. Bob had been our Winemaker for 23 years until leaving us in 2004 to pursue opportunities in winemaking education and we are happy and fortunate to have him back with us. Bob has been a thoughtful and innovative winemaker with over 35 years of professional experience as well as being a longtime instructor at Mercyhurst University Culinary and Wine Institute and Director of the Viticulture and Enology program at Harrisburg Area Community College & currently Penn State University. Bob is a native of Union City and was trained at Penn State Erie as a benthologist, a biologist specializing in studying swamp life and ecosystems. This rigorous scientific and laboratory training and experience in tandem with Bob's winemaking artistry are a powerful combination that has led to many memorable and award-winning wines produced throughout his career. Bob is also a winemaking consultant for 6+ wineries.

Randy Branch is our Commercial Sales Manager and Business Manager. He joined PIWC in May 2014 and brings with him over 25 years of sales experience in industries such as insurance, technology and commercial real estate. A native of Olean, NY and a graduate of the College of Wooster, Randy leads our day to day operations and provides our customers exceptional service in finding the grapes and juice and wine making supplies and equipment needed to craft great wine. His hobbies include sailing, skiing and the occasional round of golf.

Kelly Jameson is our Senior Customer Service Representative. As well as processing orders and assisting customers with technical wine making concerns, she keeps our wine making supply showroom looking great. If you visit us at any festivals and events, you will most likely see Kelly leading the team. Kelly has a strong wine background with 15+ years of wine industry experience. She is also an avid home winemaker. She has been with Presque Isle Wine Cellars since 2010.

Jason Schwenk is our Purchasing Manager. Jason is responsible for purchasing and tracking the winemaking supply inventory numbers through daily reports and physical checks for accuracy. He also keeps track of the wine production records, bottled and bulk wine transfers between the wine room in the warehouse, the supply shop, the winery and the Isle House and physically receives in supplies from our vendors and returns from our customers. Jason is an Erie native and enjoys spending time with his family and girlfriend. In his free time he enjoys video games, working on his custom PC, comics, going to Erie Otters games and is a big football fan, rooting for the Michigan Wolverines and Minnesota Vikings every week(SKOL!). He is also an animal lover and has a dog and three cats, Barry, Pye, Otter and Chen. Jason and his girlfriend occasionally take in sick, injured, or abandoned animals to rehab as his girlfriend is a vet tech. Jason is always willing help out warehouse, shipping and breakdown when they need it.

Jim Kunselman is our all-around “do everything” guy, and has been with us since almost the beginning, working seasonally during harvest before retiring as a GE Master Electrician. If it breaks, Jim can fix it. He keeps our production wine making equipment running at peak efficiency during our harvest time. Jim helps with wine production and bottling, and keeps our buildings and grounds looking great.

Matt Luebbert is our Winemaking Assistant. Adam helps in all aspects of wine production from receiving grapes to bottling wine. Always versatile and willing to jump in where needed.