The answer is probably best stated as yes you can but it’s not easy and would you want to when you can buy it from PIWC?

Our supplying lab makes 10% solution by adding 100 grams of sodium hydroxide (NaOH) flakes per liter of water and calls it good. Good means it could and very likely will deviate some from ‘perfect’ 10%. The flakes are very susceptible to moisture from the air so a specific weight won’t necessarily render what one would think it should. It is not that critical as we understand it.

The most common answer concerning if 10% can be diluted down to 0.1N (normal) is NO, because the effort and the required titration equipment and skill etc. may not be worth the time and expense to guarantee it really is what it is supposed to be.

The answer can be yes if one wants to take the time and effort to dilute and then titrate to check its accuracy. Normality and molarity of sodium hydroxide are the same. The normality of 10% is 2.5 so, in theory at least, diluting it 25 times should render a normality of 0.1N. The problem is of course as stated above, that the percentage can and likely will vary. Our lab, as stated above, throws in 100 grams per liter and calls it good and does not titrate it because it is not really necessary.

So, if one has good titration equipment and reagents it can be possible to dilute close to 0.1N and then titrate just to see how close. What it really titrates out to is critical to know. Say it titrates to 0.11N or 0.09N instead of the desired 0.10N. That’s fine as long as you know that and use that actual confirmed normality in the calculation. In order to use this new normality one needs to know the formula. 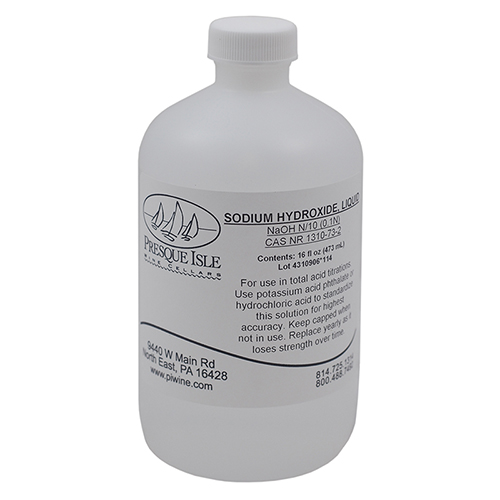 V = the volume of sodium hydroxide used in titrating the wine sample. This is the only truly unknown until the test is completed (this is the end answer). The other variables actually become known before the test is started because a decision is made on which particular normality of sodium hydroxide to use (or purchase) and a decision is made concerning the size of the wine sample that will be accurately measured out for the test. Presque Isle Wine Cellars uses and sells 0.1N sodium hydroxide and uses a wine sample size of 5 ml measured accurately with a volumetric or seriological pipet.

N = the normality of the sodium hydroxide used. For testing T/A, PIWC uses and sells 0.10N but a different normality can be used.

W = the size of the wine sample used. PIWC uses a 5 ml sample as stated above but a different size sample can be used.

Since all the variables except (V) are known in advance and usually never change, the formula can be worked down to: T/A = V * 0.15 (0.15 becomes the multiplier). This multiplier would change only if a different (N) or (W) is used.

If the normality of the NaOH is ‘sort of known’ but not sure of its complete accuracy, then it can be calibrated (or recalibrated) by titrating it against potassium acid phthalate (KaPH). PIWC has instructions on how to do this as well as sells the KaPH. If after re-calibrating it is found that the normality is slightly different than originally, the new normality (found upon re-calibration) would need to be plugged into the above formula (for ‘N’) and a new multiplier calculated.

PIWC has the instructions and the equipment needed to do the above titration process.

Additional Note: Our supplier lab makes 0.1N sodium hydroxide by weighing out about 40 to 42 grams of flakes per liter of water, lets it sit about eight hours with some stirring, then titrates it to see how close to 0.1N it is. If it is off some then either water or flakes is added and let sit again for a few hours then titrate again. This is done until it titrates to the 0.1N level. Sometimes it takes multiple titrations to reach that exact level.