Directions:Sodium Hydroxide (NaOH) will lose strength through age and exposure to carbon dioxide in the atmosphere. By testing its strength against a standard such as Potassium Acid Phthalate (KaPH) you can either adjust the calculated total acidity (TA) as shown below, or decide to get a fresh solution of NaOH. Standardized solutions of hydrochloric acid may also be used for this purpose. 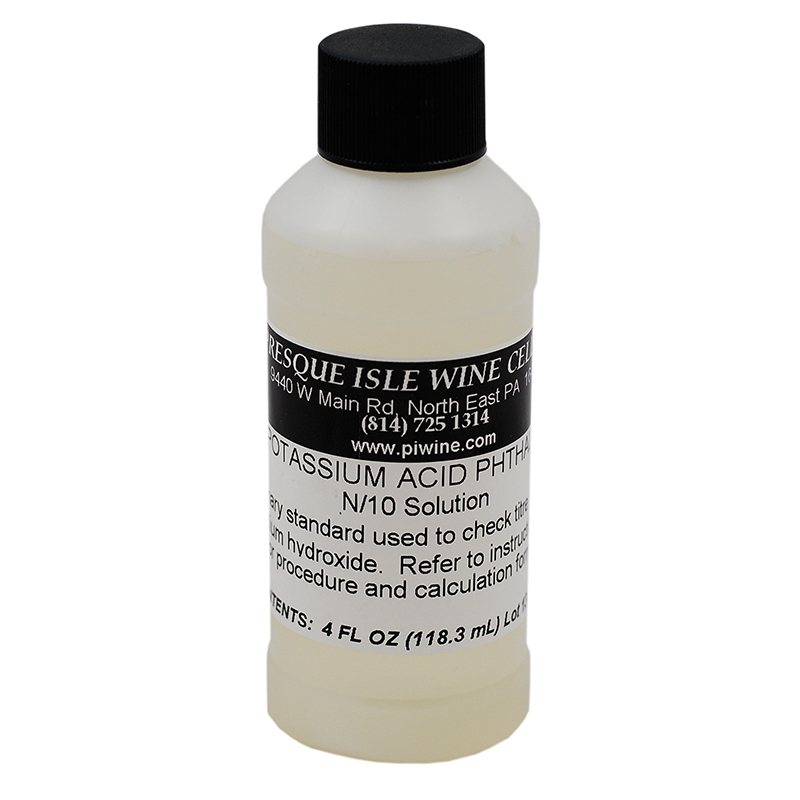 Recalibration procedure: Pipette 5 milliliters (5 mL) of the N/10 KaPH into a water glass or flask. Add about 5 drops of phenolphthalein to the sample. Titrate with the N/10 NaOH until the end is reached, which is the first pink blush that persists for at least 20 seconds after stirring or mixing the sample. Make note of how much NaOH was used. (Note that if exactly 5 mL of NaOH was used, then the NaOH is still at its stated strength and you can proceed with a normal acid test procedure).

If fewer than 5 ml of NaOH are used, the new normality result will be higher than 0.1N (N/10). More than 5 ml used will result in figures lower than 0.1N.

Corrected Acidity Calculation: Find the acidity level of the wine sample as you normally would thinking the NaOH is at its nominal strength, then adjust by multiplying that times the newly calculated normality of the NaOH divided by 0.1