Among the many classes of enzyme reactions the following are most important in processing wines and fruit juices:

Amylases break down starch (which derives from the Greek amylon) into dextrins.

Pectinases break down pectins which prevents pectin hazes, gives improved yield of juice when pressing, produces faster settling of juice, and in some cases may also release more aromatic constituents and increase the extraction of color components. These are the enzymes most useful to the winemaking process.

Cellulases break down cellulose and thus aid in juice extraction. Invertases split sucrose into its component fractions of fructose and glucose. 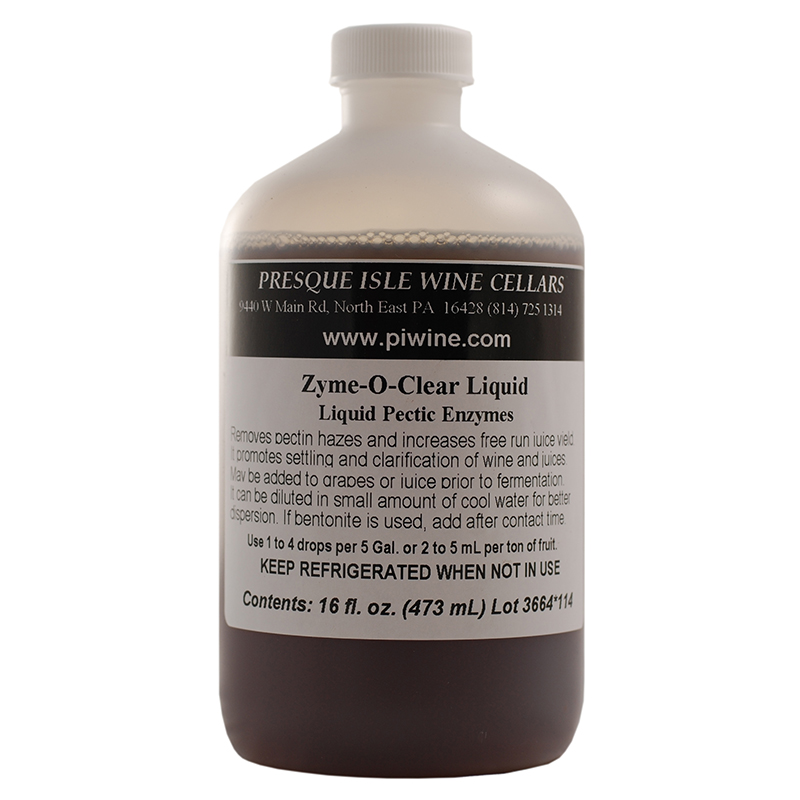 Most enzymes are produced by industrial bacterial fermentations. In the US the organism most commonly utilized is Aspergillus niger. TTB has only approved enzymes produced by that bacterium for use by commercial wineries.

In earlier times the producers observed mutations which improved the efficiency or purity of the resulting enzymes and would isolate and reproduce those organisms that produced them. In recent years it has been possible to manipulate some of these mutations and develop strains capable of producing more quickly and at higher concentrations.

Commercial enzymes began to be used in wines around 1960. At that time enzymes of 5 or 10 fold strength were at the leading edge. Today there are enzymes of 15,000 or higher ADJU’s, a common means of describing the strength of the enzyme, which stood for the term “Apple Juice Depectinization Units”.

Types and Functions of Pectic Enzymes

Pectic Enzymes are the most beneficial and most commonly used enzyme class for winemaking. Currently available pectic enzymes may have fairly specific functions, but alternatively, may be formulated to perform multiple functions. They are often mixtures which stress a particular function, but which will do others as well.

Clarity is the most common reason for using pectic enzymes. Clarifying Enzymes produce faster settling and more compact lees and permit a shorter time before starting fermentations. Grapes which have infections of Botrytis cinerea tend to be difficult to settle and, because of the gummy nature of the juice, don’t settle as fast and tend to ‘blind’ the filter media more quickly. There are some enzymes produced in Europe which are very good at eliminating these difficulties, but they haven’t been available to commercial wineries in the USA because they weren’t produced from Aspergillus niger. There are ongoing efforts to get them approved here. Even so, there are some newer enzymes which are at least better than what we have had until recently.

These enzymes typically perform the clearing functions done by other enzymes, but they are also rich in enzymes which more efficiently extract the color potential of a given batch of juice or wine. They are effective only during the period of skin contact. Some of these enzymes actually extract more color intensity while others promote stability of color so that you don’t lose as much over time. Certain tannins are also very important in promoting color stability.

Having a warmer fermentation (80° to 90° F during the first two or three days of fermentation, for instance) will give you better color extraction. However you don’t want to keep the wine at that temperature much longer because of the risk of a ‘stuck’ fermentation.

Another way is to follow the practice that Philip Wagner followed at Boordy Vineyards, in Maryland. He would draw off some of the juice or wine after about 24 hours to use for his rosé wines. He in effect had a higher ratio of skins to liquid.

Aromatic Enzymes release the aromatic potential of monoterpenes which are often bound up in forms that inhibit aroma expression. They are not very effective except in grape varieties with higher levels of the monoterpenes such as Riesling, Sauvignon Blanc, Gewurztraminer, Chenin Blanc and Viognier. It is generally best to add Bentonite after a month or so following treatment with one of these enzymes, to inactivate them in order to prevent some less pleasant aroma components that might develop over time.

These enzymes will degrade the poly-saccharides found in the cell walls of gram positive bacteria such as Oenococcus, Pediococcus and Lactobacillus. They can often inhibit a later malo-lactic in whites completely, but usually only delay one in reds. If used early in the fermentation with unsound grapes, they can help prevent the growth of organisms which would slow or inhibit the sugar fermentation.

Useful Effects of Enzymes in Winemaking

A list of the effects produced in wines or juices by enzymes includes the following:

Powders have more stability, losing only 1% to 2% per year, although many people can have respiratory issues with the powdered forms.